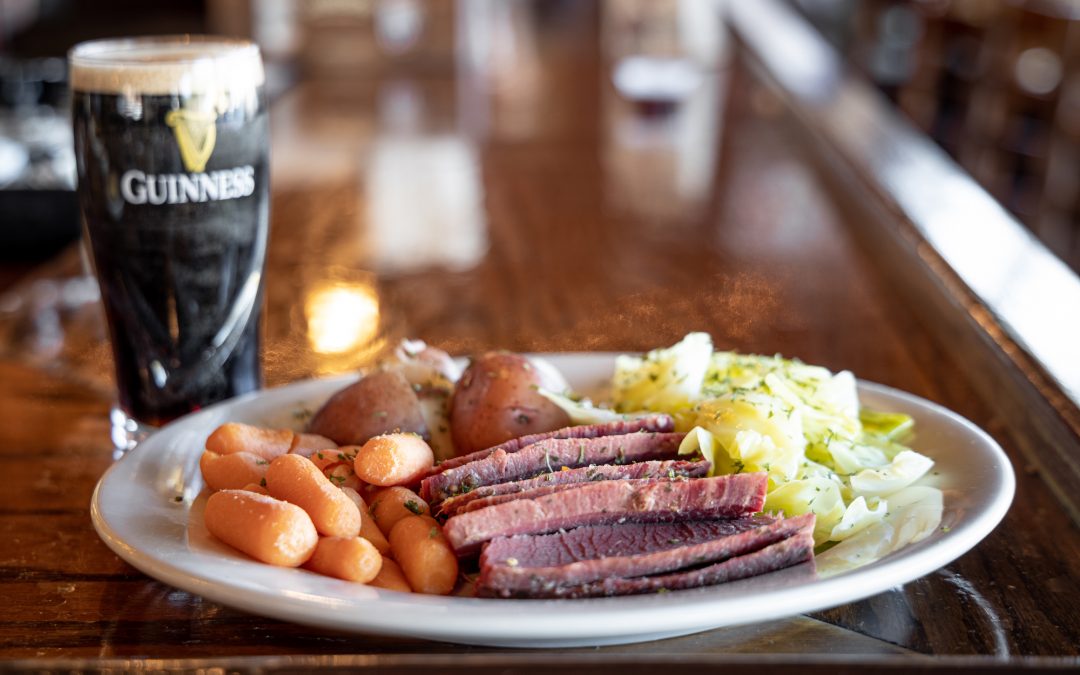 Went to New York City recently, and as is our wont, we went to Katz’s Deli. Remember that movie? “When Harry Met Sally”? That’s the place they went when Meg Ryan did that thing.

Anyway, one of the reasons we stop there is because they serve a corned beef sandwich the size of your head.

Which made us think of a chap we ran into at a food show once. He was a big cog for Bennigan’s. Remember them? “Irish American Grill and Tavern.”

Anyway, at the time the defunct chain was pushing a bunch of television and radio ads touting their newest promotion: “The Santa Fe Fajita Feast.” We thought, “Come to an Irish Tavern for…Sizzling fajitas?” So we asked the big muck about that.

Which brings us back to corned beef.

Specifically, why do we celebrate St. Patrick’s Day and the essence of Irish-ness with Corned Beef & Cabbage?

Way, way back in the 12th Century, there was an Irish king named Cathal mac Finguine, and he had a famous appetite. They even had a poem (Aislinge Meic Con Glinne) poking fun at his prodigious eating habits:

Wheatlet, son of Milklet,
Son of juicy Bacon,
Is mine own name.
Honeyed Butter-roll
Is the man’s
That bears my bag.
Haunch of Mutton
Is my dog’s name,
Of lovely leaps.
Lard my wife,
Sweetly smiles
Across the kale-top
Cheese-curds, my daughter,
Goes around the spit,
Fair is her fame.
Corned Beef, my son,
Whose mantle shines
Over a big tail.

This was the first written record of corned beef in history.

And since there is no actual corn, why do they call it “corned” beef? In olde Ireland, cows were pretty valuable. They were used for farm labor and for dairy, and they were only eaten when they could no longer work or be milked. An older cow has tougher meat, and what with the invention of the refrigerator about 7 centuries away, they cured the beef with salt. The kernels of salt that dappled the beef were known as “corns” of salt.

Many of the tenant farmers had small plots of vegetables, and potatoes and cabbages were pretty easy to grow. A hunk of salted (or “corned”) beef tossed in a pot with some fresh vegetable made for a right proper little meal. The vegetables would absorb the flavors and saltiness of the beef.

Surprisingly, this meal didn’t become popular with the average Irishman until much later. From the time of the Roman Empire, it was the British who had a taste for beef. And while they loved to tuck it away, they didn’t care for the raising and slaughtering of cows. They outsourced that to the brilliant Irish farmers.

Now, Irish farmers – a hardy lot – most often worked fields and livestock owned by someone else. The finest beef and vegetables went to the gentry class. They survived on a diet centered around potatoes, which were great for a variety of uses and could grow just about anywhere.

In 1845, a sort of virus broke out. It was a blight that attacked the potatoes of Ireland, and decimated the fields of Irish farmers. This prompted the Great Famine, otherwise known as “The Potato Famine.” This drove millions of the Irish to greener pastures, with many of them coming to America.

Where did they enter America? Ellis Island in New York City. Who did they encounter? Jewish immigrants who helmed the best kosher butchers in the nation.

What did any proud Irishman worth his weight in salt know to do with a nice piece of beef?

Hence, Corned Beef & Cabbage became known as the official dish of Ireland, and the favored plate of average Irish people around the world. And when we visit New York City, we make a pilgrimage to Katz’s Deli.